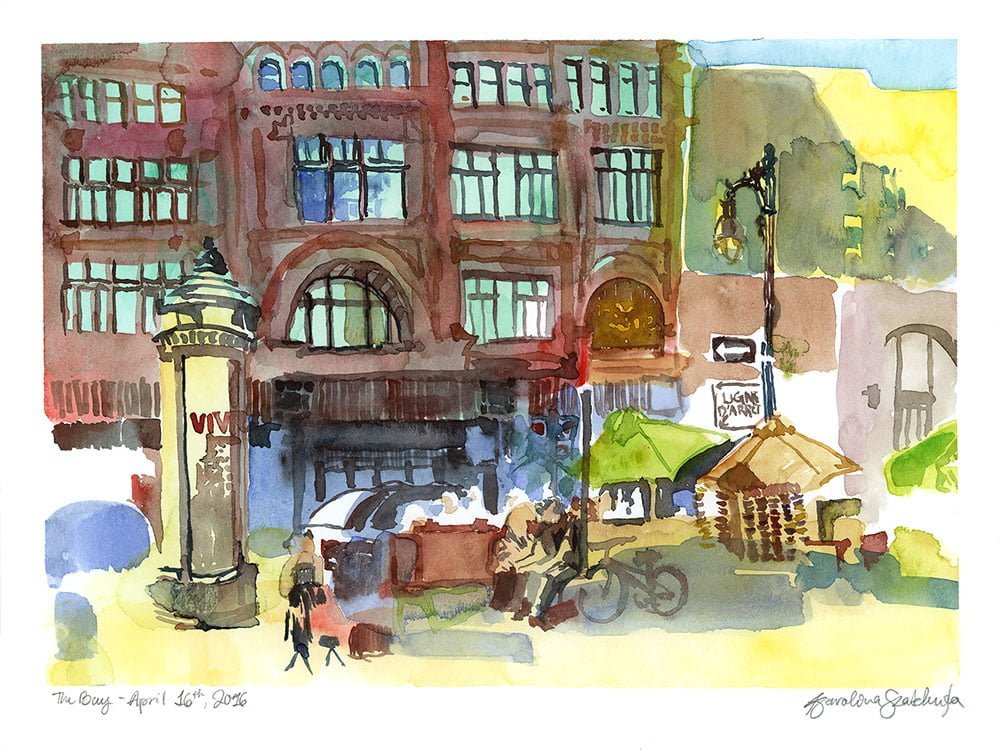 This year, I think one of my unstated goals was to avoid using the computer as much as possible while it was summer. Of course, when I have video work that makes it necessary to be on one, it can’t be helped…however, if you’re familiar with what winter is like in Montreal, there is really not much reason why I should be staring in a glowing box in a dark room during the nice part of the year. It won’t be long before the sun sets barely after 3 PM and 30 minutes will be long enough to get a frost bite. So, I haven’t posted anything I painted since intentionally and have an array of images lined up.

I’ve been focusing on painting outdoors. I’ve had a few commissions and small “indoor only” projects. My dream now is to acquire an outdoor easel for acrylic or oil painting, because watercolour is fun, but watercolour has its limitations in what can be accomplished in a short period of time outdoors and I really prefer painting on-location instead of through a photograph. Half the time, I am waiting for the paper to dry or fighting the fact I cannot revive the white of the paper. Watercolour continues to fascinate me as a medium that requires both great restraint and spontaneity.

Here are two paintings created in the downtown Montreal area. Below, a painting of The Hudson Bay Company store from across an adjacent park, where street vendors sell jewelry, ice cream, maple syrup souvenirs and treats. It was one of the first warm days of summer when I was able to relax outdoors with my partner. Many people were at the park having an ice cream. The painting itself was a challenge.

When you’re painting something like a building with many similar windows, you see the details you skip over quick into the process. My intention is to never get something down to a T; the real challenge is trying to keep pace with the changes in the scene, the water drying, the sun in your eyes and reflections off different surfaces. This painting was done over 2-3 hours, and it was still fairly early in the year with a pleasant 23 degrees Celsius, so the angle of the sunlight changed plenty and I was forced to abandon certain details. I wish I had more time, yet I was pretty tired and hungry too. My strategy for scenes like this is to get down the light in general shapes as fast as possible, because the details in the buildings won’t disappear and the exactness of the people doesn’t matter. It’s an impression of an event, a slice of time. It’s hard for me to accept being this loose and using large, organic shapes. I spent 4 years living in a small apartment with a small work space, and that has tremendously influenced my work flow – all my work has become restrained to a size smaller than 11″x14″ and absorbed in detail.

Here is another image from Dorchester Park off Peel Street, a park I like to visit when I’m downtown, in Montreal. I love this painting! I think it turned out great. It’s the perfect amount of detail and looseness. I began experimenting with bleeding inks while sketching outside, and I think I like the effect. Rather than having hard, rigid lines, it blends in and adds texture and imperfections. Sorting out the shapes of branches and tufts of leaves was another challenge. From what I remember, it gave me a decent headache, which I think was worth the result. The park visitors spent just enough time on benches to be captured in the painting, and fortunately didn’t notice they were being painted. Sometimes that’s awkward. What I also love is the contrast between the leaf green and pink background; this was not accurate to what I saw – I chose to change the colours because I knew it’d work.

There are some beautiful moments and textures in this painting, which are preserved by it being painted in minimal amount of strokes.

Overall, I forced myself to not pencil in every line, every shape accurately. It’s much harder to paint without lines for guides, and it produces a different result. I will post more paintings soon, hopefully continue to paint outdoors throughout autumn as well. I will be participating in Inktober, and if you’re interested in following along in real time, you’ll see my posts on Instagram or Facebook. Inktober is a daily art challenge, where you draw with ink for every day of October. Artists, crafty people, really anyone can participate – all you need is a pen.